This day trip incorporates a real feel for Ireland’s Ancient East. We commence with an excursion to monastic Mount Melleray, then lunch at the famous Barron’s Bakery in Cappoquin. This is followed by choice of visits to one or more historic houses and gardens: Tourin House & Gardens, Cappoquin House & Gardens or Dromana House & Gardens.

MOUNT MELLERAY - The monastery was founded in 1832 at Cappoquin by a colony of Irish and English monks, expelled from the Abbey of Melleray in France after the French Revolution. The church includes a high altar and 20 lesser altars - all in marble plus magnificent stained-glass window.
Dromana House & Gardens. Steeped in an amazing history, this property has remained in the same family for 800 years. From the 13thcentury onwards this was the seat of the FitzGerald’s. The tour, conducted by a family member, recounts fascinating facts and fables, incorporating both the Estate and the surrounding area. The garden and woodland extend over 30 acres including walks, many of which are looped. Dromana is a haven for natural regeneration.

Tourin House & Gardens - Located between Cappoquin and Lismore, Tourin House was built in 1840 in the Italianate style and features a stunning double oak staircase. A high point of any visit is the beautiful Tourin Gardens, which extend over 5 acres on the banks of the River Blackwater.  They contain a fine collection of rare plants and mature trees that ensure a beautiful seasonal display of colour. Lovely walks along garden and woodlands lead to Tourin Quay and a pond.
Cappoquin House  - Cappoquin House is an 18th-century Georgian mansion built on the site of an old Fitzgerald castle. It dominates the River Blackwater.  The castle controlled the tidal waters of the River, the main artery of trade with England. The Garden is a 5-acre plot that was laid out in the middle of the 19th century, with vestiges of earlier periods. 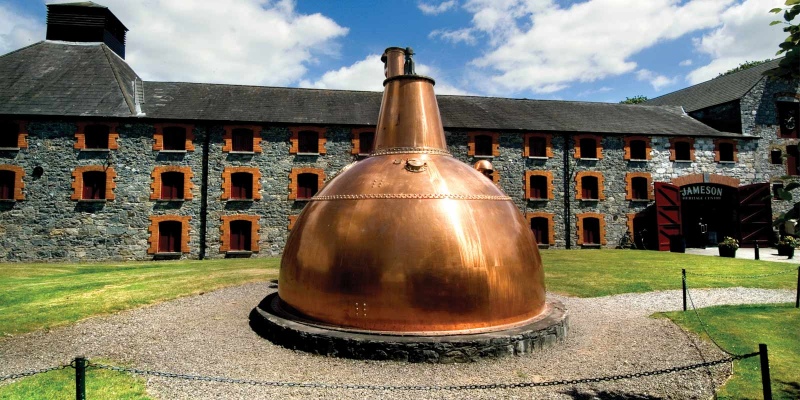 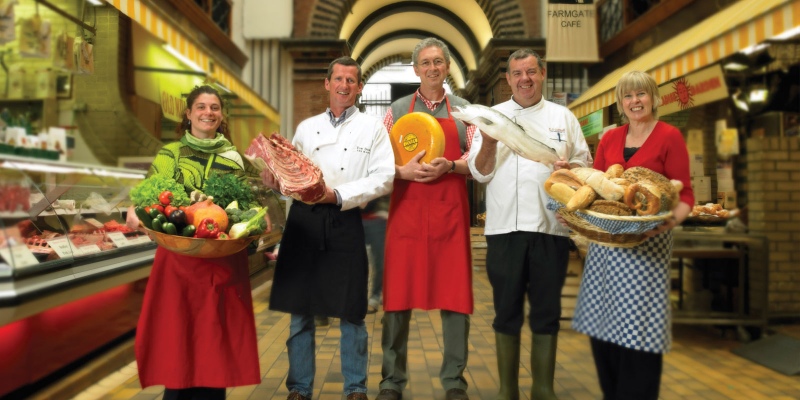 THE JAMESON EXPERIENCE: The Midleton Distillery Factory Tour.  Visitors come face to face with original kilns and pot stills and explore warehouses, and are shown the Cooperage Centre where they learn about techniques and tools that have been making casks for generations. The guided tour is a great introduction to Irish Whiskey and highlights the subtle differences between Irish brands, culminating with a whiskey tasting experience. All tours take in the exterior and interior of the distillery. Following the visit to Midleton, a leisurely bus tour of Cork City is the agenda, highlighting many of the historical facets of Ireland’s second city. No visit to the city would be complete without a visit to the renowned
ENGLISH MARKET. It presents the very best locally produced foods. It’s a meeting place, a thoroughfare, and a bustling social hub of the city.

Cork City for some RETAIL THERAPY - Of course, if your group is not really into much sight-seeing, our friendly, and ever-willing driver, will take you on a whistle stop tour of Cork, giving you a lot more time to spend on a bit of Retail Therapy!

Heritage Towns and Castles on the Blackwater
This suggested visit to Youghal and Lismore again highlights the rich history of the area and
Ireland's Ancient East, with Heritage towns holding many hidden gems.

YOUGHAL - This ancient town on the Blackwater River received its charter of incorporation in 1209, but the history of settlement on the site is much longer. There is evidence of Neolithic habitation in the town's, and Viking settlements date back to the 11th century. In fact, a stone in St Mary's Collegiate Church bears the ancient etched outline of a longboat! The town was badly damaged in 1579, during the second Desmond Rebellion, yet the downtown area of Youghal is among the best-preserved in Ireland. In 1777, the Clock Gate Tower was built on the site of Trinity Castle and served the town as a jail, and public gallows until 1837. The Clock Gate is a very interesting attraction to visit and recounts days gone by in live animation.  Tynte's Castle is a late 15th-century urban tower house while the Alms Houses were constructed by the 1st Earl of Cork in 1602. The Town Hall was erected in 1753 and is situated outside the town walls beside the Water Gate, also known as Cromwell's Arch. It was from here that Oliver Cromwell left Ireland in 1650.  Notable buildings in the town include Sir Walter Raleigh's home Myrtle Grove and the St Mary's Collegiate Church built in Irish Romanesque style in about 750, and a great Norman nave was erected circa 1220.

LISMORE TOWN + LISMORE CASTLE AND GARDENS Your journey will start at the Heritage Centre. Then, on to the Lismore Castle, with its eight-hundred-year-old historic links between England and Ireland. Originally built in the twelfth century, the Castle was subsequently owned by Sir Walter Raleigh. It was then sold to Richard Boyle, whose famous son, Robert Boyle (of Boyle's Law) is known as the "Father of Modern Chemistry." The Castle was passed to the English Dukes of Devonshire in 1753.  Spread over seven acres, the historic gardens are divided into two very distinct halves. The Upper Garden is a complete example of the 17th-century walled garden first constructed here by Richard Boyle, in about 1605. The Lower Garden was mostly created in the 19th century for the Sixth Duke of Devonshire. This garden is informal with shrubs, trees, and lawns while the stately Yew Avenue is much older and is reputed to be where Edmund Spenser is said to have written ‘The Faerie Queen.'

Kinsale
A day trip to the gateway of the Wild Atlantic Way and a town renowned for its good
food, craft shops, and friendly welcome.

KINSALE is a compact town of narrow streets with a quaint air of antiquity. Prominent historical buildings in the town include St. Multose's Church, dating from 1190, the Market House of c. 1600 and the so-called French Prison (or Desmond Castle) of c. 1500. A “must see” is Charles Fort, a partly restored bastion star fort, built in the reign of Charles II in 1677, to protect the harbour from invasion by the French and Spanish. Kinsale has had occasional important links with Spain. In 1518, Archduke Ferdinand, later Emperor Ferdinand I, paid an unscheduled visit to the town. In 1601, a Spanish military expedition - the last of the Armadas - landed in Kinsale. In the ensuing Battle of Kinsale, English forces defeated an Irish rebel force, leading to the famous “Flight of the Earls” in which some the native Irish aristocrats abandoned their lands and fled to mainland Europe.

Cork Culture and a bit of Blarney
This suggested itinerary takes in a visit to the Crawford Art Gallery in Cork City or the Cork Butter Market and Shandon followed by a visit to Blarney village.

CRAWFORD ART GALLERY is a National Cultural Institution and the regional art museum for Munster. It is dedicated to the visual arts, both historical and contemporary. Located in the heart of Cork city, beside the Opera House, the Gallery is a critical part of Ireland's cultural and tourism infrastructure, welcoming over 200,000 visitors a year. Admission to the Gallery and exhibitions is free. The Gallery´s permanent collection comprises over 2,000 works, ranging from eighteenth century Irish and European painting and sculpture, through to contemporary video installations. At the heart of the collection is a collection of Greek and Roman sculpture casts, brought to Cork in 1818 from the Vatican Museum in Rome.

THE CORK BUTTER MARKET recounts the story of Ireland's biggest food export and largest butter market in the world.

Shandon and the Butter Market 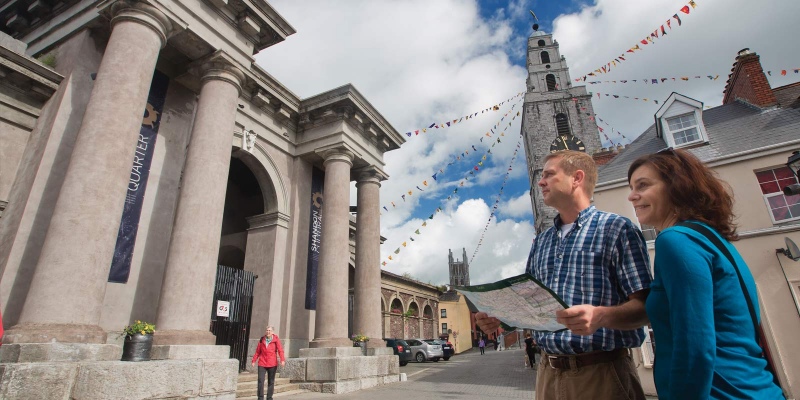 BLARNEY WOLLEN MILLS is the largest Irish shop in the world. So whether you are looking for crafts, food, folklore or fashion, it's all there under the rambling roofs of the old Mill. The Mill and the adjacent BLARNEY CASTLE are one of Ireland’s great visitor attractions. However, the spiral staircase leading up to the famous BLARNEY STONE is dangerous and not for the fainthearted, the wonderful gardens and walks on the estate are worth the visit if you have time.

Cork Harbour Island Tours
These itineraries take in the island of Fota, and Cobh, the Great Island, with its rich maritime history and a wide range of attractions. We suggest that you cherry pick two or three attractions for a great outing – and maybe come back another day to enjoy what you have missed!

FOTA Island
FOTA HOUSE is a regency style great country house situated on Fota Island.  Visitors can discover fascinating insights into the contrasting lives both the “upstairs” and the “downstairs” in days gone by. There is also an important collection of old Irish art in the house.The GARDENS & ARBORETUM at Fota House contain one of the largest collections of exotic trees in Ireland from all over the world, many several hundred years old. The arboretum is complimented by magnificent gardens and walks.
FOTA WILDLIFE PARK is one of the top visitor attractions in Ireland. Recent additions to the Park are the Asian compounds that feature lions, tigers, and rhinos. There is even a very convenient “people mover” to get you around the 100-acre park.

COBH – The Great Island
Less than 10-minute drive from Fota, you will reach the historic seaside town of COBH.  Situated in a prime south facing position in one of the world’s largest natural harbours. The town is dominated by the magnificent neo-Gothic St. Colman’s Cathedral, home to a 49-bell Carillion. Cobh (formerly Queenstown) has a rich maritime legacy that continues to this day with some 70 cruise liners visiting the port each season.  Attractions to visit include the Queenstown Story at the Cobh Heritage Centre which tells the emotive story of Irish emigration and convict ships bound for Australia. The plight of the Lusitania is also recounted here. Being the major port of emigration from Ireland, Cobh was also the last port of call for the Titanic and its tragic story is told at the Titanic Experience. There are walking tours on the Titanic Trail too.  The town is a delight to explore but has many hills. Fortunately, there is the Cobh Road Train that will take you on a guided tour rather than shanks’ mare! A recent addition to the historical mix is tours of Spike Island, comprising of a boat trip across the harbour to the fort that could be called Ireland Alcatraz. 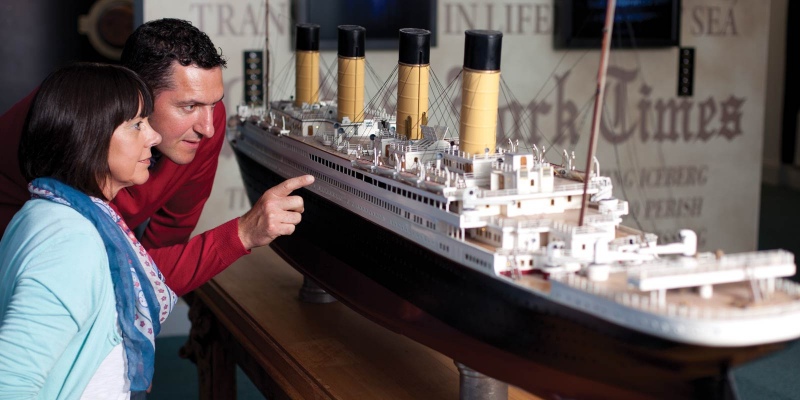 Sightings and shopping in West Waterford and Crafting in Youghal

On this itinerary, we suggest a visit to either of these two interesting towns, followed by an interesting and creative session - glazing your very own piece of pottery in Youghal on the way home!

ARDMORE
Close to Youghal is the seaside town of Ardmore, full of quaint craft shops and art galleries, with a magnificent Round Tower and Cathedral overlooking the bay. Ardmore is believed to be the oldest Christian settlement in Ireland, founded by St. Declan circa 416 AD. The site St. Declan’s monastery and holy well is located on an elevated position near the commencement of a lovely cliff walk.

DUNGARVAN
Dungarvan is a little further east of Ardmore. A perfect spot for some retail therapy with its great range of shops to choose from. The town also boasts an extensive and varied “Art’s Trail.” Dungarvan is home
to an Anglo-Norman fortification, founded in 1185 and the Copper Coast Geopark Centre, an interesting exhibition about copper-mining and also showcasing this geologically diverse area from 470 million years ago.